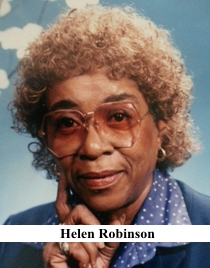 We at Robinson’s Friendly Funeral Home, Inc. commit ourselves to your complete satisfaction. Here our staff pays close attention to every detail of your loved ones funeral services from beginning to the end. It is our goal that our services reflect what each of you, our families, expect and appreciates from us.

Mr. Fred Robinson was living in Laurel, MS and working with his college roommate, C.B. Christian, for two years at his father’s funeral home before he came to Moss Point, MS in 1949 as a young man seeking employment. He had received his mortician’s license from Atlanta College of Mortuary Science in 1947. and was working nights as a bellboy at the Old Pinehurst Hotel in Laurel, MS while working as an assistant embalmer at a local funeral home. One night while assisting George Holder who was part of The Fails Funeral Home organization, conversation led to Fred coming to Moss Point. Because of its likeness to his home of Olustee, FL, where he was born and raised, Fred fell in love with the town and the friendly residents and decided to stay. Mr. Robinson went to work for R.E. Perkins who was the owner of Fail’s Funeral Home Number Three. Once he decided to stay, Robinson returned to Laurel and married his girlfriend, Helen Lee Wright, they then moved to Moss Point and started a family that consists of four sons and three daughters.

The funeral home has recently undergone extensive renovations with amenities to accommodate our customer’s needs. Mr. Robinson’s motto was and still is true “The Home of Peace and Solace for the Bereaved”. We invite you to come and visit us at Robinson’s Friendly Funeral Home, now known as the oldest and the newest funeral home in town.

Family Owned and Operated Since 1969